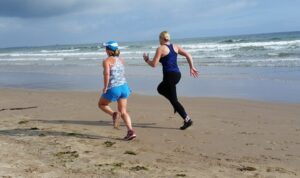 We recently gave some of our campers a taste of barefoot running on the beach, and we realised there is plenty of confusion out there about what barefoot running is, and the benefits it can bring.

Barefoot running isn’t as simple as it might sound, though, and it’s important to approach it carefully if you’re trying it for the first time.

So here is the handy Northern Bootcamp guide to barefoot running! For now, we’re going to stick to the principles behind it and how it can help. We’ll cover the kinds of footwear you can use on a future blog.

Important to clarify this before we get into the details. The idea of barefoot running is, of course, based on the idea of running with no footwear, but, let’s be honest, there are very few locations in Britain on which you’d be comfortable running with no trainers on.

Luckily there is a great range of footwear available now, which means you can achieve the same effects as running properly barefoot. For the purposes of this blog, we’ll assume that ‘barefoot’ either means running with no trainers on, AND running with specialised barefoot shoes on.

We are lucky in that we have a fantastic stretch of beach near us, so we can get our toes in the sand whenever we want. For everyone else, appropriate footwear might be the answer. Again, we’ll cover this in the near future.

The issue is approached from two angles. First is the idea that barefoot running is beneficial, in that it strengthens the lower leg muscles (calf muscles, feet and ankles), and also that it promotes a better, more efficient running style (see ‘it’s all about the gait’, below).

Secondly, from the opposite side, is the idea that modern trainers ‘coddle’ runners too much – that heavily cushioned trainers are little more than marketing gimmicks that really do very little to enhance running performance.

The concept is believed to have been started in Africa, the continent that has produced by far the best distance runners of modern times. So many of them train in bare feet from an early age, and Africa has consistently produced so many world-record-breaking runners, that there has to be a correlation, right?

The most efficient way to run is to land somewhere either on the middle or on the ball of your foot. It helps you keep momentum, and means you spend less time transitioning from the ‘landing’ phase to the ‘push off’ phase for your next stride.

Barefoot running forces you to run like this – mainly because it really hurts to land on your heels in non-cushioned trainers. Landing on the balls of your feet improves your running stance and your overall speed.

Watch this gif of Usain Bolt in action:

Only the balls of his feet ever touch the track. Plus, it’s worth noting that his feet actually make contct with the floor directly below his hips – although he has a very long stride, he isn’t over-reaching. The key is momentum and keeping a smooth style, which is only possible because of the way he is up on the balls of his feet. Nobody in the world has ever run faster than Bolt, so it’s worth taking notice! Mo Farah also has an absolutely outstanding gait: he glides so effortlessly – it’s worth watching him closely when he takes to the track at the Olympics in August.

Of course, it’s easier to stay on your toes for 100 or 200 metres, and it’s when fatigue kicks in that most people start to run in a more flat-footed way. It takes time and effort to build up enough strength to run in this way, but once you can do it, the results are brilliant.

Whether you are a seasoned runner, or brand new to the sport, barefoot running is tough. It will subject your lower legs to some serious strain that they are not used to.

It’s all in the name of progress, of course – it’s worth it in the long run (pun absolutely intended!)

Eventually, your muscles will develop and strengthen, and you will find that you can maintain this running style for longer. But it will take a bit of work to reach that stage.

The first time you run barefoot, you can expect some seriously sore calf muscles for the next 48 hours. Take time to warm up and down properly, and pay particular attention to calf muscle stretches after you have run. The calf can be difficult to stretch: one of the best ways is to lower your heel off the edge of a step, taking care to keep your balance.

There are some trainers that are more suited to novice barefoot runners, and we’ll look at these next time.