The dirty side of a triathlon - But dont let that put you off!

Olympic triathletes are prime examples of peak human conditioning, and nothing quite encapsulates human endurance and determination quite like a Triathlon. Just ask Dan and Bruce here at Northern Bootcamp – they’ve done their fair share of triathlons over the years and know exactly what it takes to complete the gruelling event. 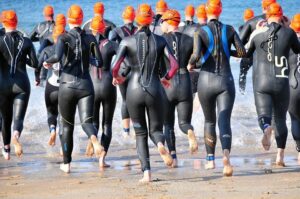 However, there is a side to competitive triathlons that often goes unmentioned – and it’s easy to see why…

Urine for a Gruelling Race

The 2016 Olympics triathlon event received a lot of criticism for its water pollution levels, but perhaps triathletes are used to swimming in ‘contaminated’ waters. The truth is that triathlon competitors will regularly be swimming through the bodily fluids of their opponents – yuck!

But when you think about it, it makes sense. Pre-event hydration is key to competitive sports, and triathletes can lose between 2-7% of their body weight in water during a gruelling event. When the margins between success and failure are so minute at the Olympics, competitors aren’t exactly going to waste precious seconds to disappear off to the toilet. Not so bad if you’re in first place in the swimming sections, but there’s definitely some extra motivation to not be at the back of the pack…

Not going to finish? Just get a lift to the finish line!

Yes, this does happen, and it happens way more often than you’d probably expect. For example, Canadian triathlete Julie Miller was stripped of her first-place finish in the Ironman Canada race for cutting sections of the course, and more local to the North East, Kielder Marathon-runner Rob Sloan admitted to hopping onto a bus at the 20-mile mark.

Suspicions were raised by spectators, as well as the fact that Sloan was the only athlete to record a quicker time in the second half of the race than the first – he was subsequently stripped of a third-place finish.

Another famous example (from as far back as the 1904 St. Louis Games) is Fred Lorz (USA), who broke down with cramp at the 9th mile of the Triathlon and then astoundingly hitched a car ride to the stadium.

However, when that car also broke down, Lorz re-entered the race at the 19th mile and crossed the finishing line in 1st place. Although he was hailed as the winner, Lorz immediately owned up to cheating and was subsequently banned for life (which was lifted just one year later).

Try it for yourself!

If even professional athletes have to sometimes cheat to finish a triathlon, you can be certain that even the best of us would struggle to complete one.

Here at Northern Bootcamp, we’re proud to offer the Triathlon Bootcamp to everyone, no matter how fit or inexperienced you are. We cater for all levels of performance and experience, so get in touch with us today to find out more.