12 hrs around the Farne Islands by kayak and Stand up Paddle board !

Northern Bootcamp is a prime location that people attend to push their physical limits and improve their fitness. After completing a recent first aid update course, the team agreed that a defibrillator would be an asset to the camp and to the local area, as the nearest one is over 3 miles away.

Myself Dan, and my team mate and good friend Bruce decided to challenge ourselves physically and go on a mission to raise some funds to purchase a defibrillator for bootcamp.

The challenge we set was to paddle for 12 hours in the North Sea, off the coast of Northumberland around the Farne Islands.  After completing the Paddle of Britain, around the same time last year, I was missing Tommy my kayak and thought he deserved another big outing and this also gave me the chance to put my kayaking arms and core to the test once again and maintain fitness motivation through the summer.  Bruce, as one of the UK’s best Stand Up Paddle Boarder’s thought he would stick to what he knew best and attempt the paddle on his SUP board. To the best of our knowledge, we do not think that anyone prior to Bruce has made it out to the islands on a paddle board, let alone completed 12 hours paddling around the islands on a paddleboard. We certainly had a challenge on our hands.

The Farne Islands are the group of islands, visible from the beach where our Northern Bootcampers run most mornings. There are between 15 and 20 islands varying with the height of the tide. They are scattered about about 2 to 5 miles from the mainland, divided into two groups, the Inner Group and the Outer Group. The main islands in the Inner Group are Inner Farne, Knoxes Reef and the East and West Wideopens and the Megstone; the main islands in the Outer Group are Staple Island, the Brownsman, North and South Wamses, Big Harcar and the Longstone. The two groups are separated by Staple Sound. The highest point, on Inner Farne, is 62 feet above mean sea level. The islands are popular with divers due to the amount of submerged ship wrecks. They are also full of wildlife such as seal colonies , and an array of sea birds such as Puffins, gannets and arctic turns. Making this a a really special place to explore.  However, with strong tidal currents, changing conditions and the distance from the shore I was glad that I was not going solo on this one.

Bruce and I were confident that between us we had enough experience to tackle the remote and unpredictable conditions that could be thrown at us. Thankfully we were also wise enough to make the correct judgement calls when indeed we were faced with these conditions. 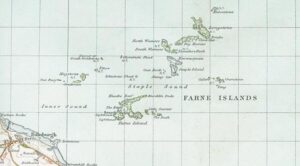 The aim was to complete complete as many loops as possible of the collection of islands in a 12 hr period, generating interest and support to raise funds to buy the much needed defibrillator

The most likely window of opportunity to complete this was in August, when the sea conditions were favourable. 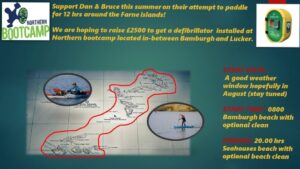 Since my 53 days of paddling last year, I have to confess I haven’t been back in my boat very much.  I therefore started paddling again about 3 months before the challenge.  Come August I was confident that I was ready.   However, my initial thoughts of paddling around the  Islands on a Stand Up Paddle Board were that you had to be a little crazy and I will admit to been slightly concerned.  However, Bruce Smith is not your average guy, training 5-6 times per week on his SUP and then in the gym also, I knew if anyone could do it, he could.  As an experience endurance veteran with several “iron mans” under his belt and the gruelling Marathon des Sables I knew he had the mental prowess to see this through.

After a few attempts to get started failed dues to changing weather, we finally got our window on 28th August 2019.

That morning we met at the Wyndings, Bamburgh Beach at 0600am ready to start our paddle at 0700. We checked all our safety kit including Radios, phones, spare clothing, spare food, first aid kits etc. We also had Kev Anderson from KA Adventure sports on standby with a rescue RIB should we need it.  With plenty of support from our current bootcampers on the beach, they waved us off to sea at 7am, giving them plenty of time to do their morning session. 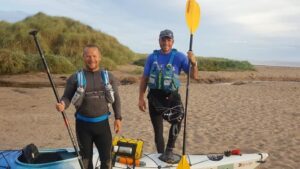 With almost perfect conditions we headed East out towards Megstone. 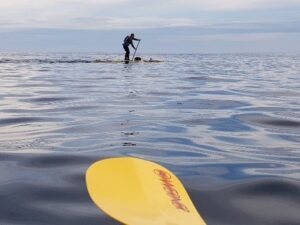 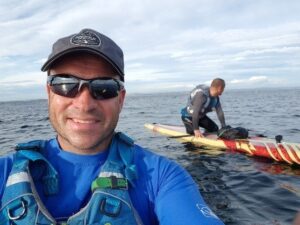 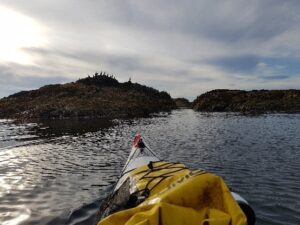 By 0730 am we had reached the Megstone and were greeted by some curious seals. Eagerly we pushed on to the last large main island Longstone and enjoyed a quick leg stretch, while assessing the conditions.

The tide seemed to be in our favour and we reached the Longstone lighthouse, making th most of this, we began to head around the south side of the Islands.

The conditions seemed to be changing with the flooding tide and larger races starting to form. However, a comedy moment kept us smiling, as we startled a pretty large seal causing him to jump and do an unplanned backflip into the sea.

Heading South for our first loop we approached the Pinnacles and things were starting to get much more lively, with a growing swell and mounting waves.  Just at that point the heavens opened and our comfort zone was not quite so comfortable. At this point we were committed paddling South around to the inner Farne.  Progress became much slower as the wind speed increased and the tide was turning.  Bruce dropped to his knees and miraculously stayed on his board during this first test of the infamous Farne tidal races. 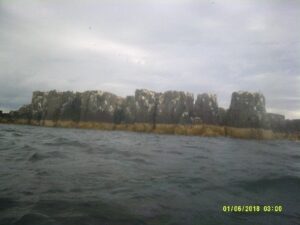 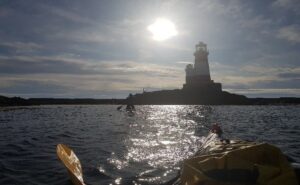 We finally made it to the inner Farne thankfully to be greeted by calmer waters.  However, this was shortlived as the water flooding was causing whirl pools and eddy lines with undercurrents and instability, of which one tipped Bruce straight into the drink.  Back on his board, we managed to land on the Island.

As a National Trust area, the ranger was there immediately checking our memberships, which do contribute immensely to protecting such a unique environment. 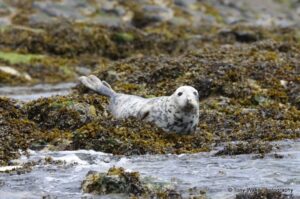 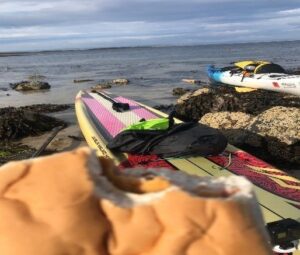 After pulling our gear ashore we then scurried up to the little chapel where we got dried off and had some food to re-energise and re-asses our next leg of the challenge. 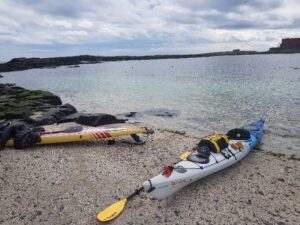 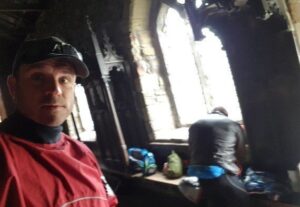 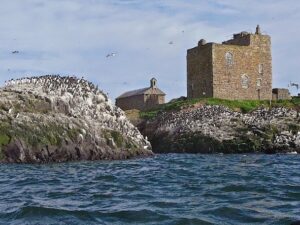 Ready to leave, until we noticed a big chance in the speed of flow of the water.  Plan B was put into place and we decided to search for calmer waters. The wind was gathering power and we knew we had a real challenge on our hands.

Heading back up North, as we approached Brownsman Island we could see a large tidle stream sweeping right to left.  By this point we were committed, there was only one option, paddle as hard we possibly could and try to beat this stream to avoid been washed out South!

Suddenly I  heard a loud splash behind me and my heart sank when I realised Bruce had fallen from his board. The conditions were challenging in a kayak but on a board even tougher.  Not to be beaten he was back on in a crack with a big grin on his face and pure determination in his eyes.

We eventually made it into a large eddie at Brownsman and caught our breath.

It was clear that everything had amplified now as we reached high flood, strong currents and streams everywhere.  Adrenalin was pumping and we had to maintain our composure.

We managed to do just that and make it back to the Longstone lighthouse where we had a quick leg stretch and checked out if it was possible to get around the back of the Longstone again.

Upon our horror we looked over and noticed a huge set of standing waves/tidle race caused by the now submerged Knivestone island. This was too much for either of us to take on and we made the decision to retrace our steps and head back.

We began a steady paddle back West towards the direction of the Brownsman and Staple sound and we noticed the wind had picked up a notch which we could tell by the speed of the wind turbines up at Wandylaw on the main land, far in the distance spinning fast.

Progress was slow as we headed into an ever increasing wind and battled against the tide.

Bruce went in again but this time the waters where bigger and way more challenging, he was soon back up and on his board, however the grin was missing. We still had a fair way to go and without the calm waters of before it was turning into a brutal battle. 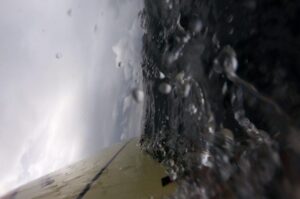 The photos taken here don’t do the conditions justice, but the aim was not to record but just to get out of here.

We eventually made it back to the inner Farne and headed back up to the chapel and took a much needed rest and food .One of the rangers gave us a cup of coffee which hit the spot, Bruce got dried off again we decided to get up on the high ground a get a good look at the sea conditions all around and see what route to take next.

Leaving the inner Farne we were aiming for Megstone once more. However by this point the wind was peaking making it almost impossible to paddle.  At the risk of getting into serious danger, we made a call to head away from the tidal races and into safer water.

Had we spent any longer in the battle, nature may have won. Energy levels by this point were low and exhaustion was starting to kick in. We had to find something to get us back towards shore

Thankfully we made it to within 50m of the shore and eventually managed to take our paddles out of the water. A massive effort to get back left us both pretty drained. However, we still had 3 hours paddling left to complete our challenge and we refused to give in. 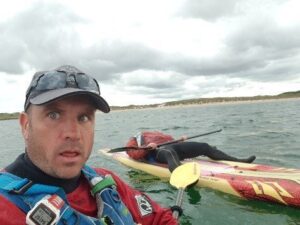 Cramps and sciatica were kicking in as we continued to keep moving up the coast line. Ten and half hours of solid paddling were taking their toll on us.

The last hour seemed to last for 3, as we paddled back Bamburgh beach, our finish point .

It was with great relief to land on shore with support of friends family and our committed bootcampers.  Both Bruce and I are extremely proud to have completed the challenge, but also to have maintained composure and made important decision throughout that kept us safe, if not completely knackered!

It was a massive achievement to paddle a full loop of the Islands and for Bruce in particular to complete it on a paddle board is astounding, great work Bruce.

A huge thanks goes to everyone that supported us before, during and after the challenge.  Special thanks to Queens Craft, Laura Sharpe that donated candles to sell, to everyone that sponsored us and to Alan McFarlane for securing the defibrillator and offering to fit it for free. We are very grateful. (Even though we hope it is never used!!)

Until the next crazy challenge,