Northern Bootcamp has spent a week using a new smartphone app, launched at the start of January, which promises to help families keep track of the amount of sugar they are eating.

The Sugar Smart app, launched by the Government’s Change 4 Life programme, allows users to scan barcodes of various foods, and reveals the quantity of sugar in each. 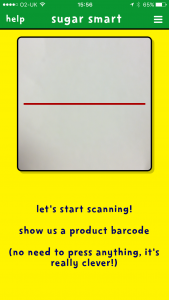 It hopes to increase the UK’s understanding of sugar content, especially in junk food, by simplifying the way sugar is represented. The sugar content of every food you scan (or at least the ones the app can recognise – more on that later) is represented in both grams and sugar cubes.

The aim is clear – if people picture their sugar intake as a visual image, such as sugar cubes, it will help encourage people to reduce the amount of sugar they consume. It’s a sound theory, but does it work in practice?

So, is it any good, and has it got a chance of becoming part of our daily routines?

The short answers are: it’s ok, if flawed, but it’s unlikely to be used especially widely once the novelty has worn off.

We started by scanning everything we could lay our hands on, and we quickly realised the app was limited by what barcodes it could recognise. We quickly found several items that weren’t recognised.

Of course, there isn’t much by way of sugary food at Northern Bootcamp, so we had to venture to a supermarket to test the app on those.

There were a number of good results, some of which might surprise some people. Some of the more interesting results include:

No type of cheese should contain this much sugar. By comparison, original Babybels contain precisely zero grams of sugar.

One litre of fruit juice delivering 18 sugar cubes in nice, quickly-absorbed liquid form! Fruit does contain natural sugars, which is where this comes from, but it typically also contains fibre and pulp, which means it’s harder to ingest quite so much when you’re eating it. Innocent boasts that there are 11 oranges in every 900ml, but you’d never actually sit and eat 11 oranges, so it’s worth bearing in mind when you’re giving orange juice to your children. Maybe just give them a piece of fruit instead? 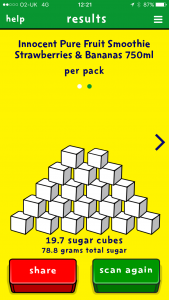 The Innocent Smoothies are worse still – in a 750ml strawberry and banana smoothie, our app tells us that there is 19.7sc or 78.8g of sugar.

OK, nobody really expects a milkshake to be free of sugar, but even the ‘reduced sugar’ version is pretty sweet. You wouldn’t add seven sugar cubes to a cup of tea, so why do you need them in a milkshake? It’s scary.

Beans have some nutritional value – they are high in fibre and protein, for example. However, the sauce they come in is laced with sugar and it’s something to watch out for. Perhaps consider the reduced sugar varieties if you must have baked beans on your plate.

Some pretty interesting results there, we’re sure you’ll agree. Much of it could be filed under ‘common sense’, but it is useful to see where sugar can be hidden sometimes, such as in the cheese slices.

If you have been using the app, we’d love to hear any examples you may have found of surprising sugar content lurking in foods that you wouldn’t imagine would be sweet. Let us know via our Twitter feed.

Other than the results, what was the app like to use? We actually ran into a few other difficulties while using it, and we hope these will be ironed out in a future update. For example, it will only store the last 10 results, so you can’t refer back to previous foods. It would be useful if there was a better cataloguing system that let you store more of the typical foods a family might eat.

The other issue is the number of foods’ barcodes that aren’t recognised still. We assume this will improve with time but we were frequently left disappointed by the app not recognising what we’d scanned.

Good: Easy to use, nice clear system, some results that people may find surprising. Might help raise some people’s understanding of how sugary some foods are – especially fizzy drinks, fruit juices, etc.

Bad: Only recognised certain products, can only store 10 items at a time. Might be too much hassle for parents to scan everything they are thinking of buying.

Verdict: It’s worth a look, and might be worth showing to the kids as a way of illustrating which foods aren’t so good for them. However, we have doubts over whether anybody, especially busy parents, will continue to come back to the app time after time.