Our triathlon coach extraordinaire, Bruce, takes a look back at the successful launch of our first ever Triathlon training camp. We have more planned this year – you know where to head for more information. 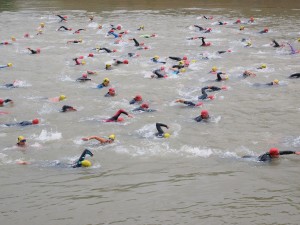 Packing away my race kit for the winter has made me reflect on Northern Bootcamp’s first triathlon training camp.

We had a full weekend planned to indulge in all things Tri.  After arriving on Friday evening, the fun really started in the pool early on Saturday morning, where there was a session designed to improve breathing techniques.

Then after a good healthy breakfast it was time to head out on the bikes for a group ride, where we worked on fitness while building in some useful skills such as cornering gear selections.

The afternoon was taken up with a little seminar on race nutrition, followed by a talk on equipment essentials needed for race day.

We then headed back out on the bikes for more training. One aspect of triathlon entails coming back from a bike ride then heading straight out for a run, so in true boot camp style we practised riding and running repeatedly, which turned out to be one of the hardest sessions of the whole weekend.

After this, it was time to cool off with a dip in the sea and try our hand with dolphin dives and deep water swim starts.

Sunday morning started down on castle green where we had a good chance to practise another vital skill, particular to triathlon. This one involved mounting and dismounting from the bike while still moving. Being on the grass definitely helped here for the occasional soft landing!

We then remained down on the green for a running technique session. A triathlon training camp wouldn’t be the same without the opportunity to try our new found skills and hone our competitive edge with a mini distance triathlon! All in all it was a fantastic two days and planning has already started for the next camp later this year!