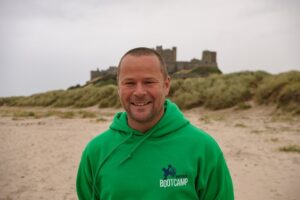 We brought you part one of Northern Bootcamp trainer Bruce’s road to Lanzarote here – in which he described the first steps in getting prepared for one of the world’s most gruelling events: the Ironman Lanzarote, in May.

A recent four-day break in-between boot camps was filled with promise for me to make some serious headway with my training: it looked like the perfect opportunity to get some good quality training days in.

I’d planned out each day meticulously: which bike routes to do on which days, combined with ‘brick’ sessions where I would cycle then head out for a run straight away. All was going to plan until I stepped out the door early Monday only to be greeted by yet another wild storm.

I wouldn’t normally let the weather put me off, but this was bordering on dangerous – the gale-force winds would have made it nigh-on impossible to get any quality training in.

Anyway all good training programmes are adaptable so I put the bike away and headed straight to the pool.

After working on my arm positions, focusing on hand entry and pull sections of the stroke it was time to try a longer swim.

Two kilometres later, I was out the water and up to the gym for a session on a spin bike. Over the years I have learned that safety should always come first and there is no sense in battling 50mph winds on the bike: it’s just too dangerous.

The rest followed a similar pattern of swim and indoor cycling combined with a couple of strength sessions, I decided to leave off any running this week to let a minor calf issue clear up. But will be back running through my favourite sand dunes very soon! My next plans are to continue to improve my swimming and get re-acquainted with my bike and find some hills.