As a leading football writer at the UK’s biggest-selling newspaper, Neil Custis is used to writing stories, not becoming them.

But Neil unwittingly made the headlines when under-pressure Manchester United manager Louis van Gaal took exception to a particular line of questioning at a press conference earlier in 2016. Van Gaal stormed out the conference, pausing only to call The Sun’s reporter Neil, a ‘fat man’.

The incident was caught on video and quickly went viral – prompting this very frank and honest response from Neil.

Neil’s recent knee injury had seen him gain weight, and he quickly set himself the challenge of losing more pounds in weight than Manchester United gained in points, between the insult and the end of the season.

Neil is currently slightly behind – he has lost about 17lbs, but Man Utd have secured 25 points: 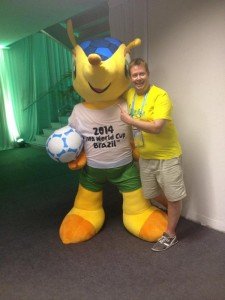 With just a few weeks til the end of the season, time is running out – so, hopefully, it’s Northern Bootcamp to the rescue! Neil is coming to stay with us for seven days, next week, and we are confident we can get him over the line. Follow the story on Neil’s Twitter feed, our Twitter feed and our Facebook page.