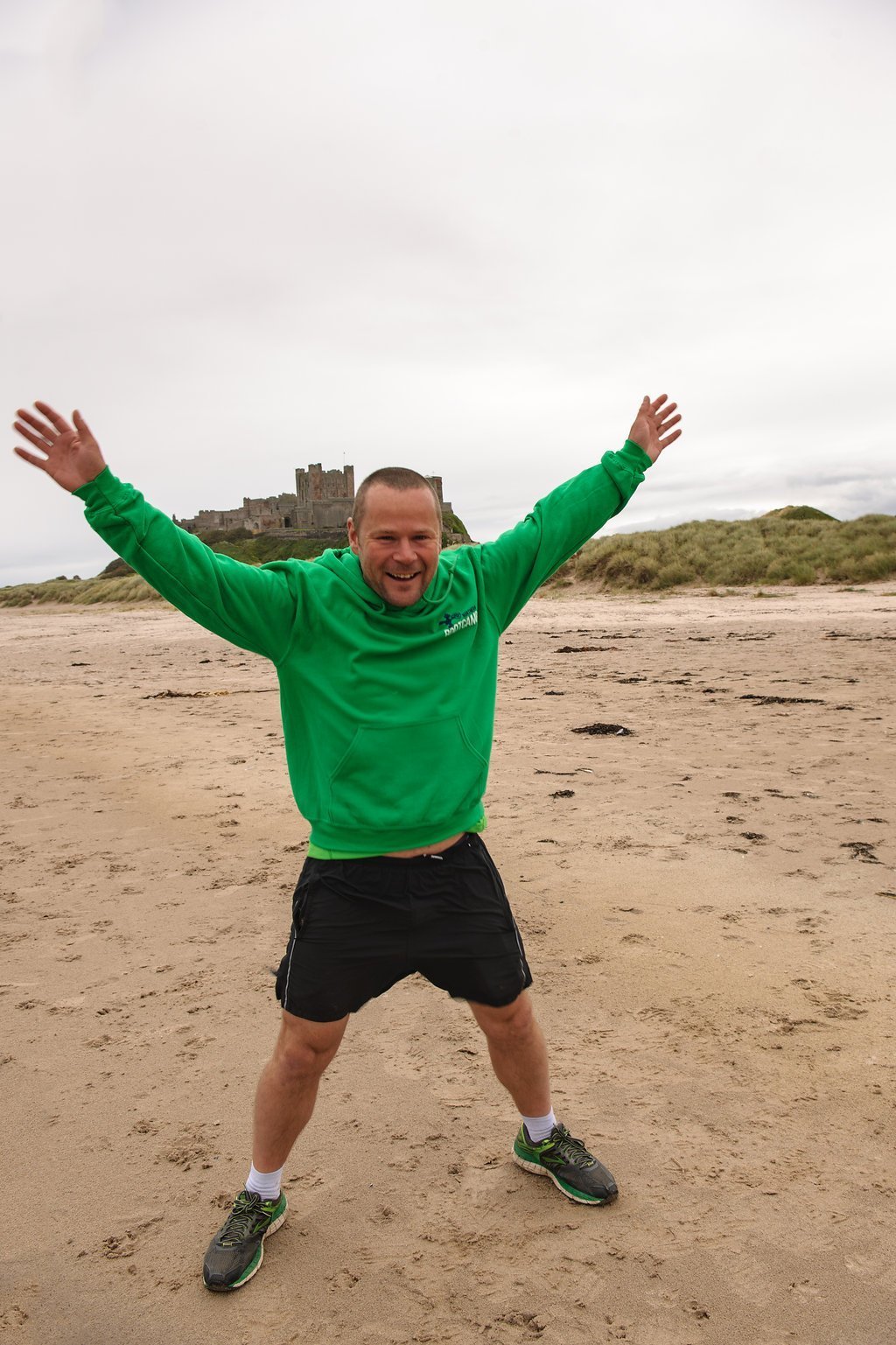 Hi, I just thought I would introduce myself. I’m Bruce, and I’ve been an instructor here at Northern Bootcamp since April this year.

The 3rd July 2009 was the day my life changed forever. Standing at the summit of Mount Kilimanjaro I realised anything is possible. I had gone from being an unfit, overweight, heavy drinking 60-a-day smoker, unable to run 100yrds, to climbing the world’s highest free-standing mountain. After going on to compete in ultra-distance running and triathlon races, I had a complete career change: I became a personal trainer, which gave me the chance to help inspire others like me who wanted to turn their own lives around. I’ve never looked back!

Each week, myself and the team will be bringing you exercise and training tips to help you go on and achieve your own goals.  This week I thought I would dive through my archive of races and share an experience I had while competing in an early triathlon race which has become my big passion. Thanks for reading and see you next soon! Bruce

So in my head, I’m thinking ‘start right at the front just behind [former Triathlon World Champion] Tim Don, draft him for as long as possible on the swim, get out the water near the front, quickly onto the bike, pedal like crazy for 20km then a nice short fast run along the sands to finish in my highest position yet.

Well, that was the plan, anyway…

The Castles Challenge, with its transition on Bamburgh Green with a backdrop of the castle, promised to be the setting of one of the country’s most beautiful triathlons, a 750m sea swim, 20km flat-ish bike ride, finishing with stunning 5km run along the sands towards Seahouses, should have been idyllic.

However having looked at the weather forecast earlier in the week I was expecting high winds and choppy seas!  So was quite pleased to arrive early in the day to watch the juniors and be confronted with mill pond Esq. waters.  As I’ve never raced an evening race before the strategy was quite simple: arrive at mam’s caravan where she had promised to serve up her famous spag bol, and then spend the next couple of hours cheering on the juniors before donning the wetsuit and having the best race of my life.

I had heard that ex-world champion Tim Don had entered the race but was still surprised to see him unloading his bike in the car park, feeling like a star stuck teenager I went over and asked for a photo and ended up chatting for a good 5 or 10 minutes what a top bloke.  After a final quick kit check and a not so quick slip into the wetsuit I’m now waiting around for the race briefing. At this point, it’s fair to say I have never been so hungry in all my life, it felt like I’d not eaten in a week and, to make matters worse, my sister-in-law pointed at my stomach and says ‘what’s that?’ As I’m guessing she’s not referring to my taught six pack I look down only to see a little tear in the neoprene! At least it was not all the way through: I was left hoping it didn’t slow me down, and tried to put it out my mind.

After the usual briefing about the race rules and course details it was time to leave the green and head down to the water’s edge.  It seemed to take forever to reach the water and several comments were heard on the way through the dunes suggesting it was more of a quadathlon! 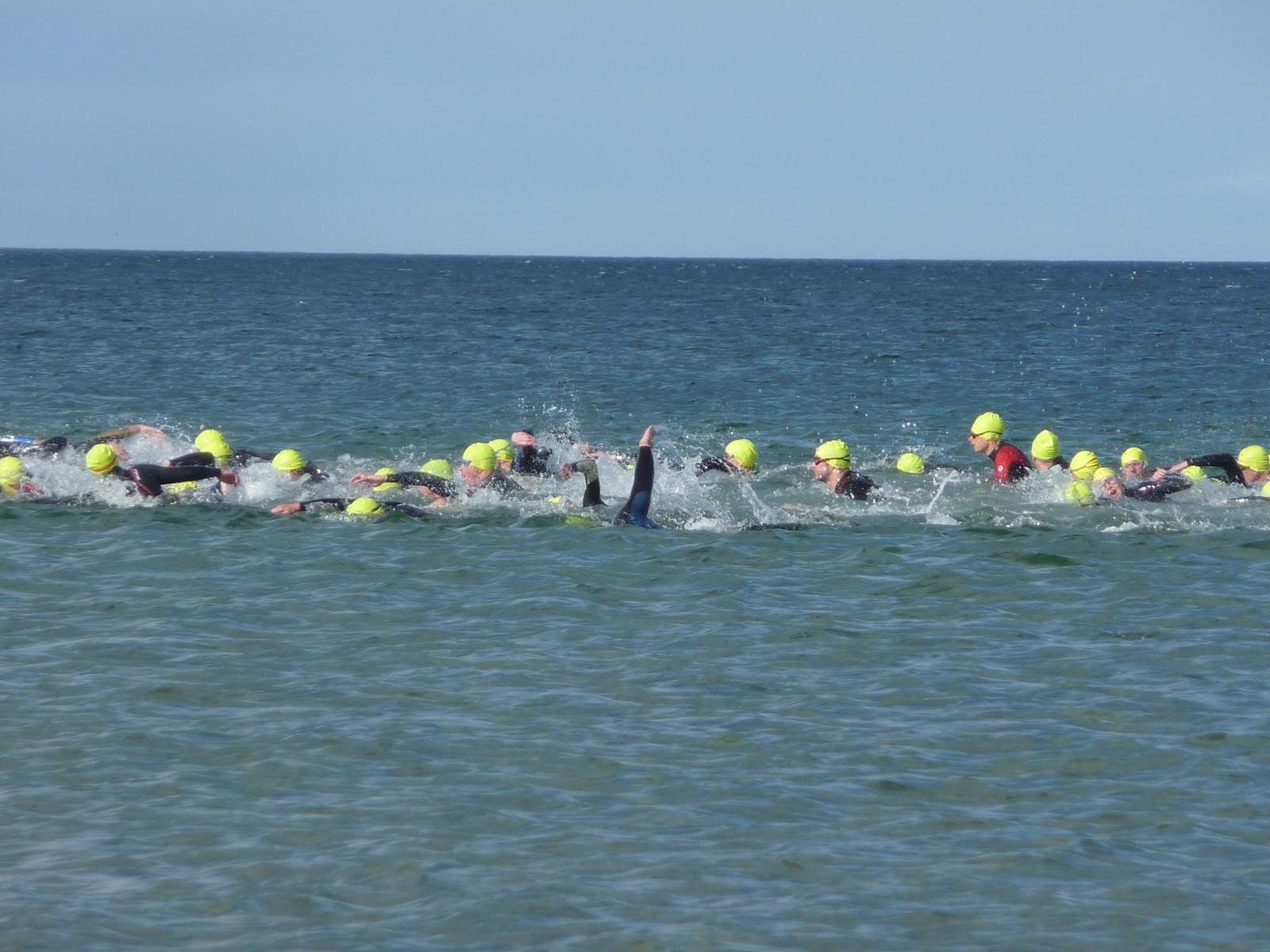 Five minutes were allowed to acclimatise to the cold water but having spent many years as a kid in these waters I thought it was practically tropical.  Soon we were all called back and lined up along the start line.  Not being the strongest swimmer, in all my previous races I’ve started towards the back and to the side swimming my own race, but it was time to step up and “get amongst it”!

Full of nervous excitement I noted a familiar figure standing right in front of me, a little shiver went down my spine as my little joke to draft Tim was coming true.  I never even heard the gun go as everyone just suddenly charged down the beach towards to sea. This was it: game on.

I reached the water, running like my life depended on it, and instinct quickly kicked in as I ‘dolphined’ over what little waves there were until the water was swimmable. Through the yellow buoys turning left was what can only be described as manic but this was only to be expected. The next ten minutes consisted of flailing arms, gasping for breath, goggles getting dislodged and leaking.

I lost count of how many times my legs and body was used as a lever for other swimmers to pull themselves over me, all I could think of was “What the hell am I doing here?”

Half way down the long straight I had calmed down a bit and tried to remember how to swim, turning the last buoy it was a short swim back to the start but against the current it felt like I was going nowhere, my arms and shoulders burned like hell and I’m sure I will never have to worry about having a salt deficiency in my diet for a long time.

After what seemed like an eternity I reached the final yellow buoy I noticed a few people walking already so that was my cue: thank god I’m never going to have to swim again!

…And out the water again

Wading through the shallows onto the sand and up through the dunes eventually reaching transition had just finished off what strength was left in my legs. With no time to dwell it was quickly off with the wetsuit, helmet on and out onto the bike route. 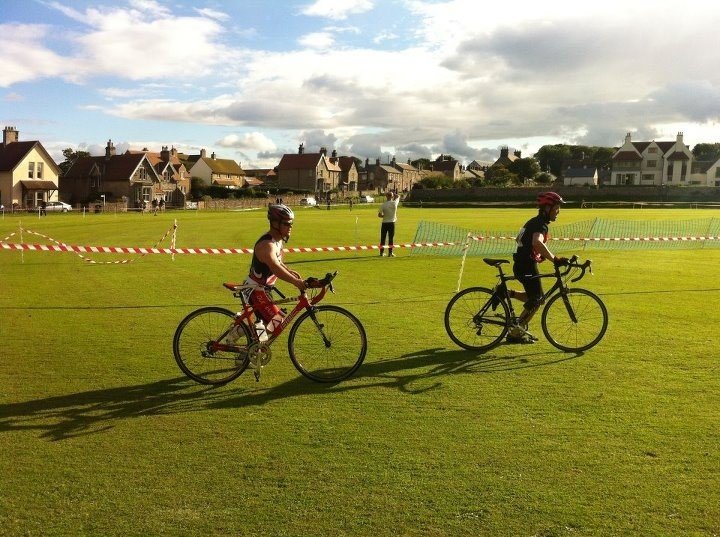 The out-and-back route headed from the castle up and out towards Budle Bay.  Soon after setting off I decided some energy drink was required and, greedy me, guzzled half the bottle. I felt immediately refreshed and raring to hunt down the faster swimmers – unfortunately my stomach had other ideas and decided it didn’t like the drink as much as my mouth did, fortunately no one was behind to catch the contents of said stomach. I’ve learned an awful lot about race nutrition since then!

I soon settled into a steady rhythm and was gradually catching and passing several riders, meaning the smile soon returned to my face. The undulating course quickly had me back in transition: another quick change into my trainers and it was back through the dunes onto the beach and out towards Seahouses.

I had been suffering from calf cramps for the previous three months, so was apprehensive of the run. They seemed to cramp hard after around half a mile, or not at all, so as usual my strategy was to take it easy at first then pick up the pace if all’s well. Running across the sand was just fantastic with the sea to one side and the magnificent Bamburgh castle to the other, I passed several more runners and was really picking up the pace rounding the turnaround point and heading for home. Once through the dunes there was one lap of the green to the finish.  Hearing the music blaring and the crowds cheering really gave a boost and ensured a final sprint to the line in rather modest time of 1:20:55.

It took the time to drink the complimentary drink to reflect and appreciate what a great event this was, and after thinking to myself never again will I be swimming in the sea, now it will be first on my list for the following year.

I would just like to thank the organisers for making this a quality event and a massive thank you to all the Durham Tri members who cheered me on throughout and really made feel welcome.  Next up Prince Bishops’ standard distance: nobody said it was gonna be easy!

Northern Bootcamp has launched a series of Triathlon Training Camps aimed at helping beginners get into the sport. The first one – October 2015 – is full, but watch this space for an announcement on more camps in 2016 soon.