Back in January I asked the question,

“Is it possible to achieve your fitness goals while maintaining a family/work balance?”

The past year, as well as working with Northern Bootcamp, I have been studying towards two qualifications, trying to help out coaching with my triathlon club, making sure my family still know what I look like and the small task of trying to train to compete in what is widely regarded as one of the toughest Ironman races in the world.

Quite simply, the fact I’m typing this wearing my finishers t-shirt, means the answer has to be yes! 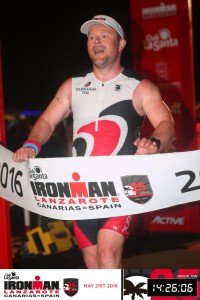 However its does take some organisation and sacrifice, but if you’re prepared to put in the graft then in the words of Ironman “Anything is possible.”

I arrived early in Lanzarote to acclimatise to the heat, however the sun must have heard of my imminent arrival and packed its bags off to Blighty for the week and only returned the day before the race!

Things really started to get real on Friday when I had to hand over my bike and transition bags ready for the morning. While walking out of transition someone decided to swing their bike round and whack right into my thigh… the guy responsible turned out to be Jans Frodeno a previous Olympic and World Ironman Champion.  This would be the closest I’d get to the race favourite all weekend.

The start of the swim turned out to be the stuff of nightmares with people swimming over, under and across my path, but I eventually settled down to a nice steady swim.  As the time passed the swell picked up, but nothing too serious. I exited the water after 1:32 – not my quickest swim but I was happy enough.

After a leisurely transition – making sure I had plenty of sun cream applied – I set off on the one lap loop of the island.  We battled intense heat, insane wind and over 2500meters of hills! I knew that I hadn’t managed any real long rides in training this time so my strategy was to take it easy, not worry about anyone else and make sure I reached the run stage in one piece. The main highlights were the stunning views from the summit of Miridor Del Rio and the sweeping descent of Haria (the two main mountains on the route). I finished the bike after 8hrs 8mins.

Another leisurely transition trying to get my trainers on when I’d lost all use of my hands was slightly troubling, but deciding I had a marathon to run I’d worry about my hands later and off I set.

The big thing I learned this race is the Ironman is not all about the bike!  The route consisted of one 22km lap and two 10k laps. My strategy was to run-walk through the aid stations while taking on fluids and running in between, which worked perfectly.

I kept a decent pace up and at times I seemed to be the only runner on the course while the rest walked. With 5k to go the hairs started to stand on the back of my neck and after 14hrs 25mins mins I crossed the finish line to the words of “Bruce Smith you are an Ironman!”